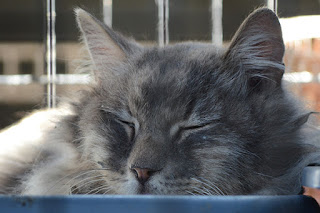 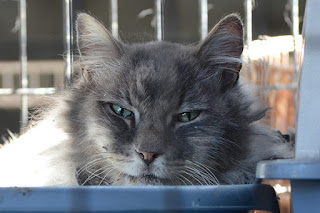 Nimbus has been one of our outdoor family since before the fire in 2012. He was one of four with their mom who just showed up. One left shortly after mom did. One met an awful end at the jaws of an ex-neighbor’s loose dogs.

Cumulus you’ve seen on FB. Quite the star he is. This is likely a ‘full’ sibling - BOTH parents the same, and definitely a litter mate.

This one, Nimbus is a long hair and has done well outside so far. This year he became a HUGE matte! We waited until after the ‘cold’ weather, and now must take action.

He comes and goes at will. So once after making an appointment for a required exam ($65) and rabies vaccine ($20) before grooming, I captured him at first opportunity.

Though likely not very happy, he has been lying in his litter, something they do for security, and now has a clean bed in a carrier, laced with ‘nip, upon which he seems in bliss, fresh water in a hopefully un-tipable bowl, fresh dry food and wet food, in a Pyrex© baking dish. See it you can destroy THAT!

He made it through the exam, rabies inoculation, and blood and urine tests. We were set up for the grooming, and I had him in a carrier, and set it on the sloped hood of the car for a moment, and he worked it off, it popped open, and he is ‘in the wind.’ I am certain he will return, as this is the only home he has known all his life, but he did give me quite a look, straight in the eye, before disappearing over a block wall when I was tailing him. I don’t know if it was ‘Thanks, but no thanks’, or ‘Gotta check my turf. Back in a while.’

We have been working for a couple weeks now at getting Nimbus sheared.

He escaped just before the first appointment. We had him in on Thursday, and they could not him without sedation, and they couldn’t sedate that day. So he had this HUGE hunk of matte hanging on his back, and we were going to have to wait until Friday April 3 before a sedation and clipping.

Since it was going to be another week before another exam, we opted for antibiotics as his white blood cell count was a little elevated.

I thought we’d try oral meds. That wasn’t going to work - him being accessible, twice a day, after eating. So we opted for a long term shot.

When we took him in for the shot, the tech came out and said they could sedate him then and finished the clip job, if we wanted. I almost broke the 6’ limit to hug her and said emphatically YES.

He is home. He has been more active in his cage in the last hour than he has in a week in the age. And he is EATING!!!! He’d dropped 1 full pound in the week between vet visits.

Wonder how it will be when re-introduced to his brother who he hasn’t seen in several years. Cumulus was brought inside after being discovered locked inside a neighbor’s shed for what was probably near a week. He is quite the FB star. 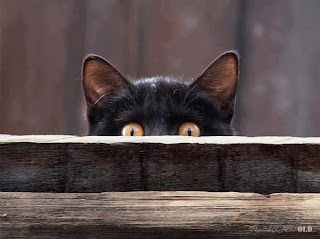